In a recent comment concerning this investigation, Dr. Alcock correctly pointed out that I was in need of some beer and a lie down. However, he later forwarded me a photograph of his own TV remote control taken with his camera phone, demonstrating (a) the variation in response of different imaging elements to invisible radiation, and (b) that Dr. Alcock himself was in need of some beer and a lie down.
As I had just completed repairs to my large array of IR LEDs (see last post), I decided to compare what my camera could see with what my phone could see.
Below: A photo of the array taken with my camera - green, as expected. Still not very bright though. It appears the green sensors are only marginally receptive to IR and the red and blue sensors scarcely at all. 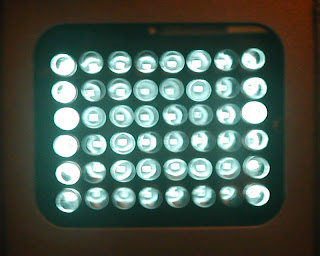 Below: My phone appears highly sensitive to IR, the red and blue sensors more so than the green. 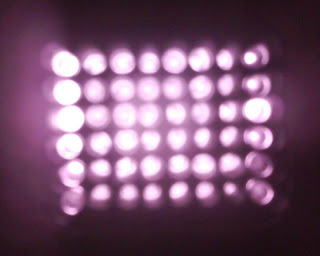 And they say the camera never lies...
Posted by Marcus Morris at 03:25