Further to my last post, I've just discovered Ultra Magenta! It's not really ultra magenta of course - that's just my name for it. I experimented further with my digital camera and discovered that it could also see ultraviolet, which the blue and red sensors render as a kind of visible magenta! 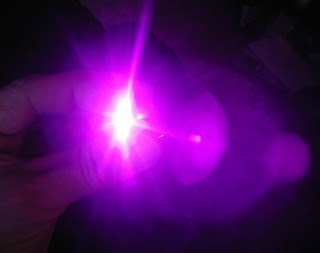 Think about it - a flash unit with an infra red and an ultraviolet source, both invisible to the human eye but the camera sees it as white light! The ultimate unobtrusive flash.